In March Southern Pioneer Electric Company (“Southern Pioneer”) submitted a proposed distribution rate (billing) adjustment plan to the Kansas Corporation Commission (KCC) for approval. The proposed adjustment will cover costs accumulated by Southern Pioneer during Winter Storm Uri and will result in an approximate $8 per 1,000 kWh of consumers’ February usage as a recovery charge on bills. If approved by the KCC, the recovery charge would be implemented for 36 months, beginning the first month after KCC approval is received.

During the week of February 15, utilities across the region experienced a significant increase in energy demand as a result of the frigid temperatures.  This increased demand, coupled with severe constraints on available generation resources, caused wholesale power market prices to skyrocket. Southern Pioneer Electric experienced a $17-20 million addition to its February wholesale power bill as a result of this unprecedented event.

“These matters were not unique to southwest Kansas,” said Epperson. “This event impacted the Southwest Power Pool’s entire 14-state region which covers most of the Midwest, from the Texas Panhandle up to the Canadian border.”

The Southwest Power Pool (SPP) is a regional transmission organization that provides balancing and reliability coordination services, as well as implements the wholesale energy market.

Southern Pioneer will avoid passing through expenses in one large bill.  Instead it proposes a plan to amortize (spread out) the extraordinary costs to consumers over a period of 36 months. If the plan is approved by the KCC, the new billing adjustment will be reflected as a “Feb. 2021 Storm Recovery Charge” on customers’ bills. This charge will be in addition to customers’ normal monthly bills and based upon consumers’ individual usage for the entirety of February 2021.

“We are committed to protecting our customers from high energy bills,” said Epperson. “We know that many are struggling with burdens of the last year and want to make sure their electric bill, as a result of Winter Storm Uri, is not an additional one.”

Any credit or additional expense towards the February event will be allocated to all consumers and reflected on subsequent bills.

Customers with questions or concerns regarding upcoming bills may contact Southern Pioneer’s offices at 800-670-4381.

This week’s unprecedented event, which created outages and significant price spikes across a 14-state region, will continue to impact electricity bills through the end of February. We are anticipating significantly and substantially higher electric bills through the remainder of the month. We would like to encourage all consumers to conserve electric consumption as much as they possibly can to lessen the economic impact on their bills. 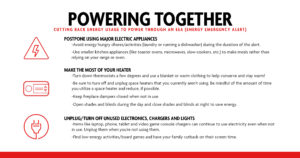 Thank you to all of our consumers who worked to conserve energy this week. We are no longer in an Energy Emergency Alert of any level.
Even without an emergency alert, it remains important that consumers continue to conserve energy to their best ability. This will aid in keeping the entire 14-state system in balance until temperatures and the price of natural gas normalize. Market prices for electricity remain high. Conservation efforts can help reduce your cost of electricity. We don’t expect these conditions to last a long period of time.
Conservation efforts can be as simple as remembering to turn off lights or unplug electronics when not in use and avoiding energy-hungry chores such as laundry or running the dishwasher during peak energy use times (7 a.m. – 11 a.m. and 5 p.m. – 9 p.m.).
At this time, we don’t know how this event will affect consumers’ bills. Once we understand the total impact, we will work to inform our consumers.